This year, the Council for Economic Education (CEE) made its debut appearance at one of the nation’s largest political forums, the Democratic National Convention (DNC).  CEE invited two distinguished groups of panelists to both the DNC and Republican National Convention (RNC) to discuss a single topic: “Financial Literacy: Is Your State Part of the Problem—or the Solution?” but the untimely arrival of Hurricane Isaac led to a cancellation of the RNC event.   Sponsored by Wells Fargo in conjunction with Fidelity and State Farm, and hosted alongside local affiliate North Carolina Council on Economic Education (NCCEE), the DNC event went on as scheduled, advancing a bipartisan initiative to improve financial literacy education.

Addressing the audience in Charlotte, host committee member Congressman Ruben Hinojosa (D, Texas) said “financial literacy means empowerment—the power to manage money, credit, debt and to become responsible workers, heads of households, investors, entrepreneurs and leaders,” therefore making it “critical… that every student be as proficient in financial literacy as they are in math, science and reading.”  And Senator Josh Stein (D, North Carolina) declared that “financial literacy is an economic and social justice issue.”Panelists agreed that economics and personal finance are best taught from an early age with integration into other subject areas coupled with a stand-alone course.

And student interest is already there, according to civics and economics teacher Nicole D. Lipp of Garinger High School in Charlotte: “Students want to know more about finances and they know more than we think they do. Last year my students were talking about Facebook going public and predicted its outcome before it happened.”

Panelist Brett Burkey, a teacher at Spanish River High School, Boca Raton, FL, prepared the following remarks for the cancelled RNC luncheon, calling for action: “Post-secondary institutions on all tiers and employers have to make it abundantly clear to the legislatures that [financial literacy skills] are skills sought in the individuals accepted and hired.  Communities will demand that [personal finance and economics] courses be installed if these incentives are in place.”

Speaking to the need for a bipartisan effort, CEE CEO and President Nan Morrison stated that “financial and economic education are tools that deliver a sense of freedom, competency and happiness to children—where they learn that they can build lives around their values and what is important to them,” she said. “Which is why it’s so important that we bridge the political divide to address it. This is an issue that falls on both ends of the political spectrum.” 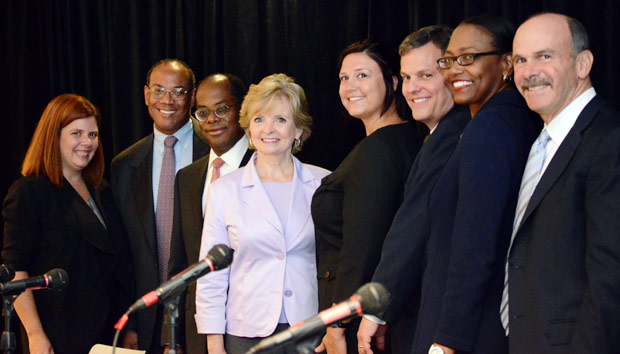