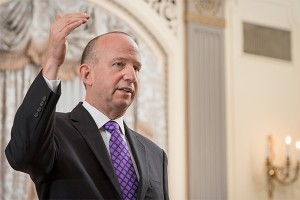 The program, held earlier this month at the Hotel du Pont, was the first of four regional events hosted by the national Council for Economic Education (CEE) and its local affiliate, the Delaware Council on Economic Education (DCEE), and sponsored by Capital One.

Highlighted during the event was the progress already being made through the strong partnership forged with the University of Delaware’s Center for Economic Education and Entrepreneurship (CEEE).

“An overwhelming majority of Americans, when hit with an emergency, would have less than two weeks of reserve on which to live and a huge number of people would be out on the streets,” said Gov. Jack Markell, a longtime advocate committed to financial education, in his keynote address. “So, unfortunately, most kids don’t know about money because they’re not learning about it at home.”

That vulnerability, Markell expects, will remain until leaders commit to educating young people on this topic as early as possible in school and with all stakeholders coming together to implement a plan of attack.

To tackle how Delaware might best approach this challenge, CEE assembled panels of educators, policy makers, volunteers and sponsors to address the role of private and public partnerships in financial education; to explore how to bring programming to more districts across the state; and to determine how all can work together to support improved economic and financial literacy.

Janet Bodnar, editor of Kiplinger’s Personal Finance, oversaw the panel discussions and fielded questions and comments from the audience.

Leslie Kosek, a panelist and representative from Capital One, suggested that before people can expect such education to take root, they need first to lift the taboo of discussing money matters within their own families.

“Until we can talk openly in our homes about earning pay checks, budgeting and saving, we cannot expect our children to learn how it’s handled,” said Kosek. 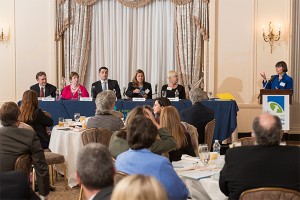 The Panel speaking on Economic and Financial Education.

“That speaks to the heart of the problem,” said Briggs King of the ranking. “Everyone assumes that someone else is going to teach financial literacy. Our ‘economic tsunami’ is a direct result of lack of financial education. It was caused by educated people who made severe financial mistakes. So, no, personal finance is not common sense.”

Ronni Cohen, executive director of the Delaware Financial Literacy Institute, believes that education need not wait until students reach secondary school, and noted preschool teachers can incorporate economic and personal finance lessons into the books that they are already using, while elementary school teachers can highlight related concepts in the math, science and history lessons they are already teaching.

Carlos Asarta, director of CEEE, reminded assembled community members that the center is already effectively equipping K-12 teachers in personal finance curriculum and student programming, working to implement appropriate standards to align with these goals, and moving toward the goal of making these important lessons a staple ingredient in every student’s education.

Using the analogy of Formula One racecars, Asarta illustrated that specialized, well-formulated CEEE programs likewise need visible and active sponsors to successfully move students across the finish line. With continued financial and in-kind support from partners like University of Delaware, local banks, like-minded organizations and individuals, Asarta expects the center to continue to offer more than 100 teacher training and student programs annually. 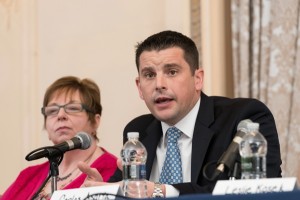 Carlos Asarta, Director of University of Delware’s Center for Economic Education and Entrepreneurship.

“Without support from the center, I don’t know how economics and personal finance could be taught in Delaware’s K-12 schools,” said Reed.

“High school students are smart and practical,” said Brown, who works with a high school club that focuses on personal finance and entrepreneurship education and is jointly sponsored by NCC Library and CEEE. “If they’re going to devote their free time to study, they need to know that there’s something in it for them. Committed funding from interested sponsors can provide that needed incentive.”

According to State Bank Commissioner Robert Glen, $1.5 million has been awarded to approximately 25 schools and non-profits over the last three years — CEEE among them — through his office’s Financial Literacy Education Fund.

But while teacher interest and program funding are important, until personal finance is more formally written into state curriculum, schools will not have the incentive to implement such programs, said panelists.

Nan Morrison, CEO of CEE, introduced statistics showing that, while all states have implemented standards that include economics, only 22 states require students to take an economics course as a high school graduation requirement. Further, while 17 states do require students take some form of personal finance coursework, only six require that testing of such student knowledge be conducted.

In Delaware, just 10 high schools currently require such coursework. These schools use an intensive training program co-authored by CEEE and the Federal Reserve Bank of Philadelphia, “Keys to Financial Success”. 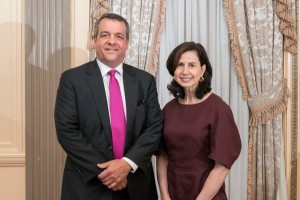 “Among students using the ‘Keys’ curriculum, the data shows that significant improvement is being made,” reported Asarta.

Attendee Kathy Floyd of the Consumer Financial Protection Bureau in Washington, D.C., asked how the federal government could help.

Bonnie Meszaros, associate director of CEEE, said she would like to see state standards put in place and related testing conducted for personal finance — similar to what is already in place for economics.

“Once assessment came along for economics, it became a standard subject,” said Meszaros. “Until the same happens here, two-thirds of Delaware students will leave high school with absolutely no grounding in personal finance.”

Andrew Hill, Federal Reserve Bank of Philadelphia economics education adviser, agreed and said advocacy in this regard is key.

“Because Delaware has a history of successfully lobbying for economics testing and standards, it has a good chance of doing the same for personal finance,” said Hill. “The end goal is to get a capstone project like ‘Keys’ positioned in all high schools. Such a program would move Delaware to a state everyone would look to model.”

For Hill, centers like CEEE are essential to accomplishing this goal. 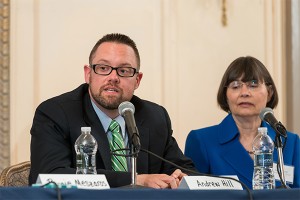 “The CEEE is truly the small wonder in economics and personal finance education, making huge strides and doing more than any one organization has ever done in this regard,” said Hill. “They do so because they realize that teacher training is the key.

Panelist Preston (Dusty) Shockley, education associate with the Department of Education  who received a master’s degree in economic education, said the real question is how the incentives awarded to schools and districts can change.

“If positive test results influence funding, we need to pretest and posttest students to get schools on board,” said Shockley, adding that until as much focus is placed on personal finance as is on reading and writing assessments, substantial change is not imminent.

Stephanie Messinger, a teacher at Charter School of Wilmington, encouraged parents and principals to be first adopters and assured fellow audience members that teachers are already on board.

“We’ve learned from a number of panel members about the importance of partnerships and volunteers,” said Asarta in closing. “We want to not only continue the relationships we have developed over the past four decades but also create new ones and welcome the opportunity to engage your companies in our activities. In doing so, we can go on to educate thousands of students in economics and personal finance every year — none of which could happen without your commitment.”

“There’s no question that other states around the country are learning from some of the work what we’re doing here in Delaware,” added Markell. “I am very encouraged by the progress we are making but the bottom line is there is much more to do. The reason you all were invited here today, thanks to the support of Capital One, is not to challenge public policy issues but to realize that government cannot resolve these issues alone. We have to continue to work together to be successful. I hope that you all will respond to the call to promote financial literacy and when you do, we’ll all be much better off.”