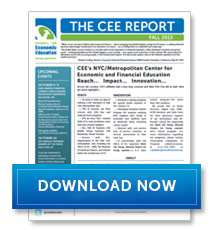 Three times a year the Council for Economic Education releases the CEE Report, highlighting our new and noteworthy events, programs and partnerships, including pilot programs and joint ventures with key supporters.

“When we do not teach children about personal finance—about managing household budgets, saving for the future, or making informed decisions about larger investments in an education or a home—we are failing them in a shameful and costly way.

The United States cannot continue to miss the mark on the importance of financial education. Other developed countries around the world—including Australia and the United Kingdom, most recently—now require such instruction in their schools. We cannot afford to fall behind, and to fail our young people, in this fundamental respect. Our democratic system rests on the effective operation of a free market economy.”

END_OF_DOCUMENT_TOKEN_TO_BE_REPLACED

NEW YORK, NY MAY 8, 2013 – The Council for Economic Education is thrilled to announce the winners of the 13th Annual National Economics Challenge, a rigorous academic competition putting students’ economic skills and knowledge to the ultimate test. Nailing questions that few adults could answer correctly, Iolani School, Honolulu, HI took home the top prize for the Adam Smith Division, (for advanced placement, international baccalaureate and honors students) and Little Falls Community High School, Little Falls, MN was named the winner of the David Ricardo Division (for students who have only taken a single-semester economics course).  These teams outpaced over 10,000 other students to win an all-expense paid trip to New York City for a two-day competition to determine the overall champions.  This year’s Challenge is generously supported by State Farm®.

In the Challenge, CEE applies the excitement of an athletic competition to academic excellence, providing students with the opportunity to apply their economics knowledge and work in teams. Competitions are held at the State, National Semi-Final, and National Final levels in the two divisions.  In each competition, teams of students answer rigorous questions on microeconomics, macroeconomics, international economics, and current events. At the National Finals, students complete rounds of testing, work in teams during a critical thinking round to solve a case problem, and participate in a quick-paced oral quiz-bowl in order to compete for the title of National Champions.

The four finalist teams face each other in the final round of the Challenge in a “quiz-bowl” format held in New York City.  Each team must have previously won in its state and been one of the top four highest scoring teams at the National Semi-Finals competition in order to advance to the championship series.

“Every year, the students competing at this level impress me more and more with the breadth and sophistication of their knowledge,” said Nan J. Morrison, CEO and President of CEE. “Their grasp of complex economic concepts is remarkable at any age, but particularly so at the high school level. Congratulations Iolani and Little Falls on your achievements, and for setting the bar high for next year’s competition!” 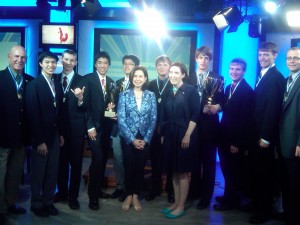 April was Financial Literacy Month, and educators, families, non-profit organizations and businesses across the country rallied in support of financial education.

The National Assessment of Educational Progress released The Nation’s Report Card: Economics 2012, Grade 12 at the end of April. These tests are administered by the National Assessment Governing Board, who develop assessment frameworks in mathematics, reading, writing, science, geography, U.S. history, civics, economics, the arts and technological literacy.

Students’ scores of economic literacy changed little between 2006 and 2012, suggesting that the national discussion about the millions of jobs that were lost and homes that were foreclosed didn’t translate to higher academic achievement. During that period, several states added an economics course to high school offerings and some started requiring it to earn a diploma.

CEE’s work has been mentioned specifically by Federal Reserve Chairman Ben Bernanke; “Financial education supports not only individual well-being, but also the economic health of our nation,” Bernanke told a town hall-style meeting with teachers in 2012. “As the recent financial crisis illustrates, consumers who can make informed decisions about financial products and services not only serve their own best interests, but, collectively, they also help promote broader economic stability.”

Register here (we encourage you to submit a question in advance through the registration page). Join the conversation on Twitter by using #NAEPtalk during the webinar.

Nan J. Morrison, President and CEO of CEE, was an adviser on the project, and she will take part in the webinar.

With constant changes in the housing, job, and stock markets, not to mention international trade, American students more than ever need to know how our economy connects with the world around us. As tomorrow’s consumers, investors, and voters, are students equipped to interpret financial news, make decisions about negotiating a college loan, and understand how economic policies affect their wallets?

The Nation’s Report Card: Economics 2012, Grade 12 reveals how well 12th-grade students know and apply the concepts of microeconomics, macroeconomics, and international trade in real-world contexts, as measured by the National Assessment of Educational Progress (NAEP).

Join the National Assessment Governing Board for a webinar exploring the results of this timely report. Webinar panelists include Nan J. Morrison, CEE’s President and CEO; and Edward Alvarez, Assistant Principal, Thomas A. Edison Career & Technical Education High School, who was honored at the 2012 Visionary Awards as one of CEE’s Teacher Champions.

CEE in the News: New Standards

“In coming weeks and months, a new set of standards for financial literacy will cross the desks of educators across the country. The hope is that schools will embrace these guideposts and begin to wedge money lessons into students’ daily activities.

The Council for Economic Education, a nonprofit promoting financial education, developed the new standards at the request of and with input from educators at all levels. “We have a specific plan to go state by state and get these implemented,” says Nan Morrison, CEO of the council.”

The Council for Economic Education (CEE) is pleased to introduce the National Standards for Financial Literacy, a framework for the body of knowledge and skills that should be contained in a K-12 personal finance curriculum. Developed by a team of experienced and talented economists, education specialists at Federal Reserve banks, and financial education researchers, the National Standards for Financial Literacy raise the bar for financial literacy education.

The standards contain the six areas of knowledge and understanding that are fundamental to personal finance: Earning Income; Buying Goods and Services; Using Credit; Saving; Financial Investing; and Protecting and Insuring.  Each standard emphasizes decision-making skills by explicitly relating planning and goal setting, financial decision-making, and assessing outcomes to each standard. Through the standards, students learn how their personal situations and preferences affect their financial decision making, while beginning to understand the trade-offs inherent in every choice they make.  In the end, more informed choices lead to better choices as well as greater satisfaction with the choices that are made. END_OF_DOCUMENT_TOKEN_TO_BE_REPLACED