Today’s public schools are tasked with so much to teach that it isn’t surprising that many essential skills are over-looked with the current focus on reading and math scores and standardized tests. What is often missed in this narrow focus is the impact that these other essential skills can have on reading and math instruction. The curriculum in the elementary school where I taught was of both high rigor and high caliber but it neglected economics to concentrate on reading and math. With this in mind, I recognized the need to bring this subject to our students, the majority of whom were English Language Learners (ELLs) or former ELLs. After the economy was hit hard in 2008, I wanted my students to learn more about saving for their futures and the many long-term benefits, versus the costs, of college but I didn’t know how to bring this instruction into my elementary classroom. 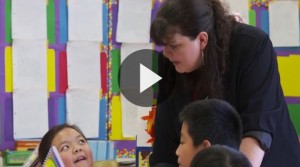 The Council for Economic Education showed me how to incorporate these ideas into my classroom. It began when I took their course on how to create a mini-economy. With this training, I was able to make our class a place where students learned (as part of their math curriculum) how to keep bank accounts, act as bankers and store clerks, open pencil-loaning businesses, and also experience the real-life issues of rent, tickets, co-payments, unexpected expenses and price inflation. Then in the next year, my next class moved beyond just being consumers in a mini-economy to being producers by utilizing a three-dimensional printer to create the store stock and in the process began to investigate the issues of supply and demand in their mini-economy. Imagine their excitement when they were featured in an article about their mini-economy, not just the first class, but two classes, two years in a row! Talk about underscoring the importance of the economics they were learning!

Not surprisingly, the students’ reaction to this instruction was enthusiastic and they were utterly engaged. What was surprising was the powerful response from the parents who were delighted to have their students learning economic vocabulary such as deposit, withdrawal, expenses, goods, consumer, etc. and the real-life experiences of keeping a financial log and having to learn about delayed gratification if they wanted to save up their money for larger purchases in the future.

In addition to all of this economic instruction, we eventually added the element of debate, around economic topics which included: “Should the Penny Stick Around?” and in so doing, incorporated elements of reading and writing. My students learned the importance of research, interviews, and public speaking in addition to developing an understanding of the need to save for the future, but not just any future, THEIR future. The mini-economy was a success at getting even the most reluctant student out of the sidelines of learning and into the heat of debate. For example, my most reluctant writer would always have his essay ready so that he could be on one side of the debate when it was time to start talking about economic issues.

The mini-economy even outgrew our classroom and spread to other classes on the grade, including inter-visitations for debates. Most importantly, it empowered the students to feel confident about making financial decisions, understanding the importance of saving, and it even made the most reticent students outspoken about the importance of economics in their life. Economics instruction ultimately became embedded in the very math and reading skills that originally seemed to have no room for anything more and in so doing, equipped my students with the traditional skills taught as well as essential economic skills.